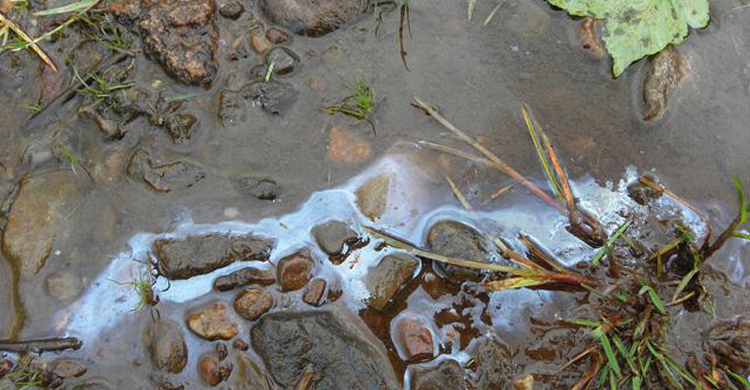 Researchers at Tshwane University of Technology are using tiny aquatic organisms that consume oil to develop a biological wastewater decontamination system. The use of living organisms to treat wastes and rehabilitate the environment is called bioremediation.

Fat- and oil-containing domestic wastewater causes severe environmental pollution when discharged into freshwater systems. The oils form an impenetrable layer on the water’s surface and prevent oxygen transfer from the air to the water, which can kill aquatic animals and plants.

Researchers looked at whether three microscopic protozoa species (relatives of amoeba) could grow in oily wastewater by using carbon-rich oils as an energy source.

Intriguingly, all three species degraded oil more efficiently when grown together rather than in isolation. This synergy probably occurred due to each species converting different components of the oils into less harmful and more easily-degradable products.

Researchers achieved the best oil-degradation efficiency (>20%) when they grew the three protozoa together at 30°C and pH 8 in wastewater containing 100mg/l of oil. Since this wastewater, obtained from fast-food outlets, had a 40-fold higher oil concentration than the recommended limit, researchers are now studying ways to improve the efficiency of this potentially crucial bioremediation system.

Plants can be used as biological factories to manufacture proteins such as pharmaceuticals, industrial enzymes or vaccines. Despite reportedly being cheaper than alternative microbial or mammalian protein-production systems, proteins are still not produced in plants on a large commercial scale.

Researchers from University of Pretoria and University of Cape Town therefore decided to test whether plant-based protein manufacturing is economically viable. To do this, they used a techno-economic model to analyse production of a commercial enzyme, horseradish peroxidase (HRP), in plants.

The scientists used a common soil bacterium to transiently deliver the HRP gene into plant cells of the tobacco relative Nicotiana benthamiana. Financial modelling showed that N. benthamiana produced HRP at comparable cost and quality to the more common method of extracting the enzyme from horseradish roots.  However, the plant-production system is only economically feasible if HRP is produced on a large scale of over 5kg per year.

The researchers concluded that by doubling greenhouse productivity to 30 kg plant biomass/m2/year, doubling HRP concentration to 480mg/kg biomass, and increasing protein yield from 54% to 63%, 20kg of HRP could be produced per year. In this scenario, HRP will cost $611/g to produce and can be sold at $1,250/g, giving a net present value of $39 million and making the project an attractive investment opportunity.

Why Africa is missing out on the gene revolution

Despite being heavily dependent on crops like maize and cassava to feed its population, Africa produces the lowest crop yields per hectare in the world. While diverse and complex reasons for Africa’s low productivity mean there is no simple quick-fix, University of Cape Town’s Emeritus Professor Jennifer Thomson argues that genetic engineering can improve the continent’s food security.

Her reasoning is that many factors contributing to low crop yields are unique to Africa, and require similarly unique solutions that conventional breeding cannot provide. Genetically modified (GM) crops could provide entirely novel sources of resistance to pathogens and pests like viruses, insects and fungi. The vitamin content of nutritionally-poor crops could be enhanced, and maize could be designed to require far less water while yielding the same amounts of grain as conventionally-bred maize, which would surely be a plus in drought-prone Africa.

Many of these potential solutions are either in the production pipeline, or are already present in commercially-grown GM crops. So why is Africa not benefitting from them? Thomson maintains that in addition to unfounded fears of the health- and environmental risks GM crops pose, the cost of stringent regulation is prohibitive to all but the biggest seed companies.