Cassava: a solution to food security in Southern Africa?

Cassava: a solution to food security in Southern Africa? 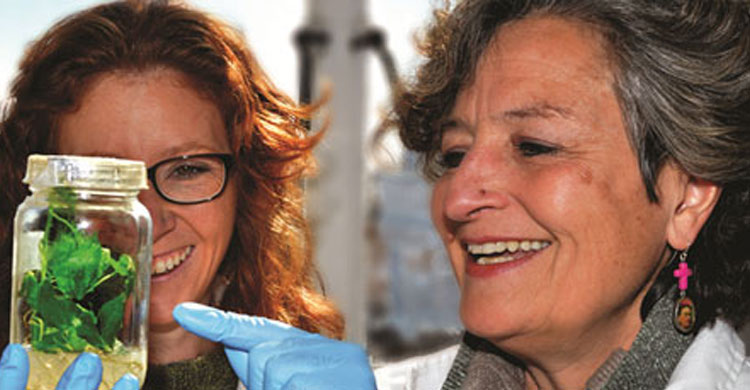 Cassava is the third most important source of human calories after rice and maize, according to the UN Food and Agriculture Organization, so when 60% of crops in Africa are lost due to disease, warning bells sound.

“Other than its high carbohydrate content, other factors contribute to this root plant being vital to Africa’s food security,” said Professor Chrissie Rey, a Professor in the School of Molecular Cell Biology at Wits University.

According to her it is a hardy plant, able to tolerate drought conditions, grows in a variety of soil types and can be left in the ground for long periods of time, offering excellent food security to those who don’t have food storage facilities. The roots can be used for food, most famously tapioca, which in Africa is prepared and eaten like a maize porridge, whilst elsewhere it is also used as a dessert. Several African countries are gradually replacing wheat flour with cassava flour from 10 to 40 percent for the production of staples like bread, biscuits, pasta or noodles.

Cassava is also used for industrial purposes, such as a source of high quality starch. It also is an excellent source to produce bio-ethanol, whilst the waste products from any of the aforementioned processes can be used as animal feed.

Furthermore, the leaves constitute a good vegetable rich in proteins, vitamins and minerals, which the root itself lacks. Studies have shown that proteins embedded in the leaves are equal in quality to the protein in egg. Therefore, if properly processed, the leaves can provide a balanced diet protecting millions of African children from malnutrition. Additionally, the plants shed their leaves during their growing period, creating a source of organic fertiliser.

“Cassava can yield up to 80 tonnes of roots per hectare, under favourable growth, water and fertilization conditions, but in Africa this figure drops to around nine. Cassava mosaic disease (CMD), caused by a number of viruses, is the culprit for this devastating loss,” Prof. Rey explained, adding that an incentive for farmers to grow cassava is that it produces higher yields per land-unit than other crops such as yams, wheat, rice or maize.

As cassava has the potential to be an important crop for South African farmers, she has dedicated herself to finding a solution to the crippling CMD. Her efforts are yielding excellent results with promising transgenic lines currently being tested for resistance to one of the cassava viruses in greenhouse trials. This work has been funded by the Technical Innovation Agency, National Research Foundation and Casquip Starch Manufacturing Pty. Ltd. and is currently also being funded by the Gauteng Department of Agriculture and Rural Development (GDARD).

“I have been involved with this project for the past 15 years and almost gave up a few times,” said Professor Rey, but added quickly that with her science is a passion and you have to be patient and stubborn.

One of the problems is that cassava is a very difficult crop to genetically modify and requires significant funding and technical skills, something that is in short supply in South Africa, particularly for a crop that has not, until more recently when it gained the support of the Department of Trade and Industry (DTi), been recognised as a commodity.

“Despite this, we have registered a South African and US patent for developing RNA hairpin duplexes to engineer plants for stable virus resistance,” Professor Rey said, adding that although these biotechnologies were specifically developed for cassava, they could be applied broadly to any agricultural crop.

“Besides my research I love teaching,” said Professor Rey, who has been instrumental in establishing a Masters in Biotechnology with a large component of entrepreneurship in biotechnology and an emphasis on the biosafety of GM crops.

Her passion for cassava and plant biotechnology has attracted so many local and foreign African students that it earned her the National Science and Technology Forum Award for Capacity Development in 2010.

This article, written by Clinton Wittstock, originally appeared in Blazing a biotechnology trail.