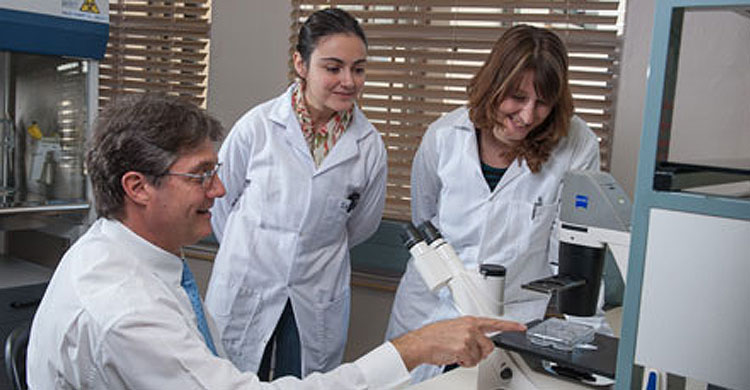 Prof Michael Pepper, Director of the Institute for Cellular and Molecular Medicine, with some researchers at the Institute. Image by the ICMM.

Diagnosing cystic fibrosis (CF) should be simple because it is caused by a defect in a single gene. But in South Africa, the standard tests for the disease fail to diagnose around 50% of cystic fibrosis patients.

Essentially, this is because it is simple to diagnose CF in Caucasians, but South African doctors have struggled to diagnose the disease in black and coloured patients for years.

“Because our population is so diverse, we’re going to find unique mutations in this part of the world that are not found elsewhere,” explains Prof. Michael Pepper, Director of theUniversity of Pretoria’s (UP’s) Institute for Cellular and Molecular Medicine (ICMM).

The ICMM has used data from patients on whom a molecular diagnosis cannot be made to look for common genetic mutations that could be used to diagnose cystic fibrosis in all South African populations. The results speak for themselves. Pepper says that with these new genetic markers, the percentage of cystic fibrosis patients that cannot be diagnosed will drop to just 5%.

This example epitomises the general approach of the ICMM towards research, and sets it apart from many traditional research institutes, especially those in the more developed world. “Our main objective and focus is the patient,” says Pepper. “That’s our market, so we do market-oriented research.” This is commonly known as the bedside-to-bench model, and works well in countries like South Africa where the disease burden is high and resources are limited.

This project also demonstrates the multi-disciplinary and translational nature of ICMM research. Promising results from the genomics project were quickly moved to diagnostics research, and have now entered the realm of intellectual property management, all within the ICMM.

The ICMM began in 2008 in a single empty laboratory, and it has grown from the ground up to encompass 20 research groups across seven of UP’s nine faculties. Perhaps most importantly, the institute does not just include health research, but has incorporated entrepreneurship, intellectual property and data processing groups.

Recently, the ICMM also expanded to include the new Medical Research Council (MRC) Extramural Unit for Stem Cell Research and Therapy. Pepper heads up the unit, and says that they are one of the most active stem cell groups in the country. He says it is the flagship group in the Institute.

Stem cell research and therapy, along with infectious diseases, neurosciences and genomics make up the ICMM’s four key research areas. “We didn’t create these structures from the start with a view to filling them,” says Pepper. “Rather, all of this has slowly but surely coalesced into the current structure based on need and opportunity.”

The ICMM has a small but growing focus on neurosciences, specifically focussing on exercise and mental health, as well as brain activity during musical performance. Mental health research has mostly been neglected in Africa, and the ICMM is aiming to address this lack of research. There are plans afoot to establish a centre for neuroendocrinology within this division in the next year.

In addition to its work on cystic fibrosis, the ICMM uses genomics to develop cancer diagnostics and study immunity in South African populations. Pepper hopes that the ICMM can continue to delve into the genetic diversity of South Africans to find solutions to the country’s health problems.

Ultimately, finding South African solutions to the health problems South Africans face is what drives Pepper and the ICMM. In his own words: “Out of the heavy burden of disease and our genetic diversity flows a unique opportunity.”

Michael Pepper is Director of the MRC Extramural Unit for Stem Cell Research and Therapy as well as the ICMM as a whole. He is a professor at UP as well as professeur associé at the University of Geneva.