Putting tobacco plants to good use

Putting tobacco plants to good use 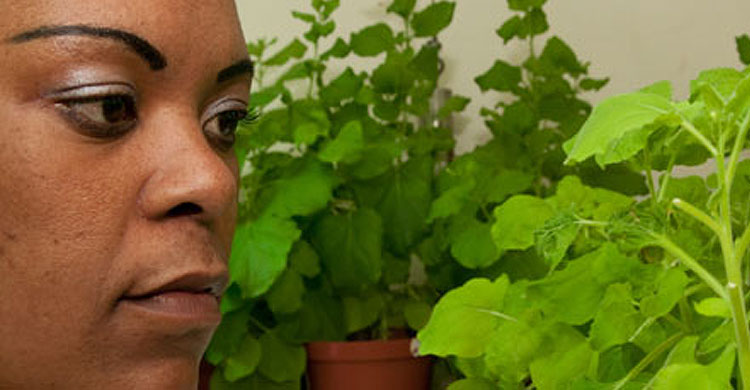 A CSIR researcher with the Nicotiana benthamiana plants used by the biopharming platform to create new molecules for health and industrial applications. Image by the CSIR.

Elephant populations have become a major problem in several of South Africa’s national parks. In 2008, culling was made legal in order to limit the devastating impact that elephants can have on their environment, but animal rights groups are strongly opposed to the practice, calling it inhumane.

To help solve this problem, the Council for Scientific and Industrial Research (CSIR) is working on a harmless biological method of elephant contraception. “We can raise an immune response against proteins that would normally be on the egg. Once the egg is presented, it is coated with antibodies and you don’t get fertilisation,” explains Dr Tsepo Tsekoa, the Science Innovation Leader of the Technology Demonstration group at the CSIR. The project is headed up by Dr Maretha O’Kennedy, Tsekoa’s colleague at the CSIR.

Essentially, this would be a vaccine against pregnancy, technically known as an immuno-contraceptive.

The CSIR, in conjunction with the University of Pretoria, are also looking at applying the technique in rats and mice to control infestations in areas like Gauteng’s Alexandra Township. Theoretically, pregnancy in any animal can be prevented using immune-contraceptives, so it may even be an option for “sterilising” domestic animals such as dogs and cats.

But perhaps the most exciting aspect of such a vaccine is that it can be produced in tobacco plants, similar to the way in which the experimental Ebola drug ZMapp is generated.  The technique, known as biopharming, harnesses the production lines of billions of tiny cellular factories contained within tobacco leaves to produce non-plant proteins on demand. An example of how the biopharming platform produces an antibody: 1) DNA encoding the antibodies is inserted into a bacterium. 2) Tobacco plants are inoculated with the bacteria, which delivers the DNA into the plant cells. 3) Plant cell machinery reads the DNA and produces antibodies. 4) Antibodies are harvested from the plants. 5) Antibodies are purified into a form that can be given to humans. Image byScienceLink.

The CSIR has established a biopharming platform, which takes on South African research with good potential for commercialisation and moves it towards commercial application. The platform works on a number of projects in human health, veterinary health, and industrial biotechnology, at various stages of development.

Projects like the elephant immuno-contraceptive are a good way to test out the biopharming platform because veterinary health products are not subject to the stringent regulations imposed on drugs and vaccines for human health. For the same reason, the CSIR is also putting its efforts into industrial biotechnology, specifically proteins used widely for research and diagnostics.

“The truth is that if you get a blockbuster product in human health it’s more commercially viable, but to get there is very risky,” explains Tsekoa.  Products destined for humans go through a much more stringent regulatory process, and there is a much higher chance of failure.

Nevertheless, researchers are working on several human-specific projects at the biopharming platform. One project is using the plants to produce antibodies that can limit the effects of HIV, sourced from HIV-positive patients that are part of a study at the National Institute for Communicable Diseases.

Other projects they are working include a rabies vaccine that uses a similar approach, and developing the methods needed to produce a rapid-response influenza vaccine in case of a flu pandemic. There isn’t sufficient international vaccine capacity for everyone in the world,” says Dr Tsekoa. “We would like to produce antigens that are most relevant for the Southern African region and not have to depend on international sources for a vaccine.”

Biopharming has a unique capacity to produce vaccines rapidly. In a recent proof-of-concept study, a company called Medicago demonstrated that they could use tobacco plants to produce a vaccine in six weeks. Using conventional technology, it would take a minimum of six months.The biopharming platform at the CSIR has the licenses and the technology to produce such a rapid response vaccine and has already done so at small scale.

But for Tsekoa to fulfil his mandate as leader of the technology demonstration group, he would like to see the biopharming platform expand to include a pilot plant for production on a larger scale. “We’ve shown that we can use plants, we can do biopharming and we have molecules that work in vitro and in animal trials, but then what?” he asks. “We need the capacity to make clinical grade molecules and at commercial scale.”

Tsekoa hopes that this important step towards commercialisation will happen in the next few years. If it does, South Africa will be at the forefront of a potentially booming global biotechnology industry­ – all fuelled by the humble tobacco plant.

Dr Tsepo Tsekoa is Science Innovation Leader at the CSIR, where he has worked since 2007. His work has focussed on producing and purifying proteins for use in human or veterinary health. He studied at University College London and University of Cape Town before obtaining his PhD from University of the Western Cape.