Taking the sting out of diabetes

Taking the sting out of diabetes 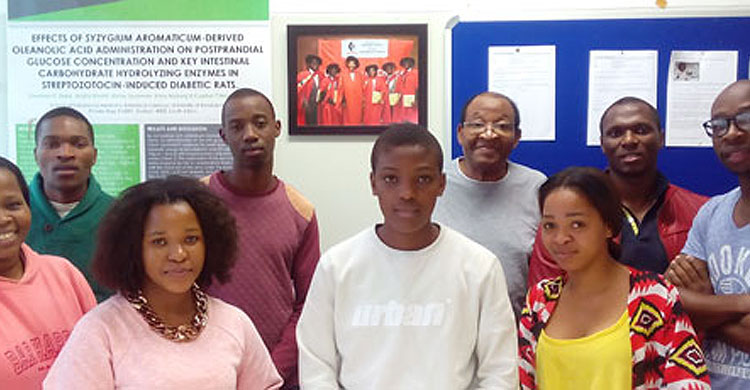 Professor Cephas Musabayane and his research team, based at the University of KwaZulu Natal, created a transdermal insulin patch. Image by ScienceLink.

Jabbing yourself with a hypodermic needle stings, but countless diabetic patients today live with the reality of this thorn in their side. Luckily, University of KwaZulu-Natal researchers are working on replacing the needle with a painless dermal patch that releases insulin directly into the skin.

Motivated by a need to move away from conventional (and often unpleasant) means of treatment, a team of researchers from the department of Human Physiology at the University of KwaZulu-Natal (UKZN) has devised this novel way of administering insulin into the bloodstream without the need for painful self-injections.

Professor Cephas Musabayane, who heads the research team, explains that besides the pain associated with insulin injections, there are other adverse side effects that come with the conventional treatment of diabetes.

A member of Musabayane’s team, Dr Sethu Ngubane explains:  “Insulin delivered as a bolus is associated with cardiovascular complications due to the large amounts of insulin that is introduced into the system. This is also associated with increased sodium reabsorption which leads to increased blood pressure.”

“The average type 1 diabetes patient can inject themselves with up to eight injections every day,” says Musabayane. “Patients’ kidneys and cardiovascular systems stop working properly and then there’s also insulin resistance to deal with.”

The research team set out to overcome these side-effects with the use of a transdermal patch that would release insulin through the skin and into the bloodstream at a constant rate.

One of Musabayane’s post-doctoral fellows, Dr Silindile Hadebe, explains how their novel dermal patch worked against diabetes symptoms: “When the patch is applied to the skin, the insulin diffuses through the skin and makes its way into the blood where it lowers blood glucose levels.”

As described in their recently-released research paper, the key to treating type 1 diabetes lies in delivery methods that maintain insulin concentrations in the body of a patient.

“If you deliver insulin using insulin-containing dermal patches, you get a controlled, sustained release that avoids large amounts of insulin being introduced into the system too quickly,” Dr. Ngubane explains.

According to their tests, this sustained release of insulin mimicked the natural rate of insulin release in a healthy, diabetes-free animal.

They determined this by inducing type 1 diabetes in rats using a naturally-occurring chemical called streptozotocin. According to the peer-reviewed publication, the researchers were successful in delivering insulin transdermally as they observed the presence of insulin receptors in the skin of the streptozotocin-induced rats – a tell-tale sign that insulin is being diffused through the skin.

Understandably, Musabayane and his team’s research has gathered a fair amount of attention, both in the media and in the pharmaceutical industry. “People want the patch and they want it now, but they need to understand what a long process this is,” says Musabayane. “We are at the very early stages.

“Just the other day a woman called me saying her daughter is in trouble and asked when she can buy the patch.”

A brainchild of Musabayane in the early 2000s, this concept of administering insulin into the bloodstream of diabetic patients using a dermal skin patch has now been proven to work, but more research under more realistic conditions must be conducted before the patch finds its way into the market.

“We are the think tanks,” says Musabayane. “It’s early days and we were testing the concept under clinical conditions on experimental animals. We are not the production line – that that only comes much later.”

Musabayane’s research into unconventional means of treatment does not stop with diabetes – his team is also working on replacing the “very bitter-tasting” chloroquine treatment against malaria with a dermal patch similar to the diabetes one.

“We intend to develop a new transdermal delivery system for insulin and chloroquine which is aimed at the entire population of sub-Saharan Africa at risk of contracting malaria, as well as those patients with type 1 diabetes mellitus who do not have access to daily insulin injections,” says Musabayane.

Cephas Musabayane is a professor of physiology at University of KwaZulu-Natal’sSchool of Laboratory Medicine and Medical Sciences. He and his research team focus on management of diabetes using medicinal plants, using molecular biological, biochemical, cellular, pharmacological and whole organismal approaches.