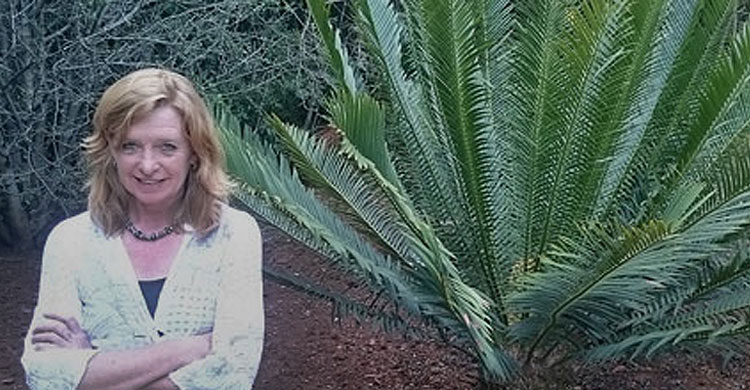 Prof. Michelle Hamer, director of zoological systematics at SANBI and the local coordinator of the Barcode of Wildlife Project, next to a cycad (Encephalartos lebomboensis) in the National Botanical Gardens in Pretoria. The cycad is one of the species that has been included in the project’s DNA library. Image by ScienceLink.

In August last year, staff from the Kirstenbosch National Botanical Gardens in Cape Town awoke to find that 13 magnificent cycads had vanished overnight. They’d been uprooted by thieves, probably to be sold to a buyer who would never even know they’d been illegally sourced.

Specimens of the critically-endangered species Encephalartos latifrons, virtually extinct in its natural habitat, were also stolen.

Illegal traders often strip off all the leaves of such threatened plants, leaving only the trunk, so that authorities would have no clue to identify the species as illegal for trade. This makes successful prosecution nearly impossible, which, in turn, means that the trafficking of endangered species is still international big business, worth tens of billions of dollars every year.

But these criminals won’t get away forever, because a global initiative known as the Barcode of Wildlife Project (BWP) is creating a DNA reference library of the world’s most threatened species.

The library will allow for the accurate identification of threatened plant and animal species, and can be used by government agencies for border inspections and courtroom prosecutions. It is run by the Smithsonian Institution (the American museum group), through the broader Barcode of Life programme, which aims to develop DNA barcodes for every species.

With our cycads, rhino and other rich biodiversity, South Africa has become a favourite destination for poachers and wildlife traffickers. That is why in early 2013, SA, along with Kenya, Nigeria and Mexico, became involved in BWP, pledging to each identify 200 threatened species for DNA sample collection.

The Department of Environmental Affairs has tasked The South African National Biodiversity Institute (SANBI) with coordinating the project.

But getting the samples can be quite an adventure.

“So far one of our biggest headaches has been the endangered sharks. We don’t have all the endangered species in our aquariums, so our teams literally have to go find them in the ocean,” says Hamer. “And once you find the sharks, you can’t exactly just swim over and ask for a DNA sample either.”

It has been similarly difficult to locate some of the rare snake and chameleon species that are not currently found in captivity. Researchers have to locate wild individuals in the veld.

“It’s been quite a monumental effort. I don’t think we’ve seen this kind of collaboration in South Africa before. We have trained around 35 people from the National Zoological Gardens, the University of Johannesburg, the KZN Sharks Board, SANBI and the South African Institute for Aquatic Biodiversity to be part of the collection teams,” says Hamer.

“Because the samples have to be solid enough to hold up in court, we are also working together with the Green Scorpions, prosecutors and the police. It’s a unique project and everyone is very committed to make sure the samples are solid – otherwise the traffickers and poachers will keep getting away with it.”

What further complicates the issue is that for every DNA sample, five “lookalike” species that resemble the threatened species also have to be sampled. This removes any potential uncertainty when traffickers claim their specimen simply resembles a threatened species.

“What this means is that we actually have to collect thousands of DNA samples from all over the country – five samples for every threatened species and for each of the lookalike species,” explains Hamer.

She is confident however, that once the first trafficker or poacher has been brought to book thanks to BWP samples, all the effort would have been worth it.

“So far the samples haven’t been used in court, but there are already cases pending where they might make a difference. It’s very exciting to be part of a project that is completely new and that can have such a significant impact. It’s a fantastic example of the application of taxonomic work combined with modern technologies to solve real problems.”

What is needed now, says Hamer, is to alert the public that the Barcode of Wildlife library exists as a resource, and to make law enforcement officials aware that they need to take DNA samples of confiscated species to compare to that library.

“In doing so, we can hopefully make the lives of wildlife traffickers a lot more difficult,” says Hamer.

Prof Michelle Hamer is director of zoological systematics at the South African National Biodiversity Institute (SANBI). She has been with SANBI since 2009, before which she served as associate professor in biology for almost a decade at the University of KwaZulu-Natal (UKZN), where she still holds an honorary associate professorship.