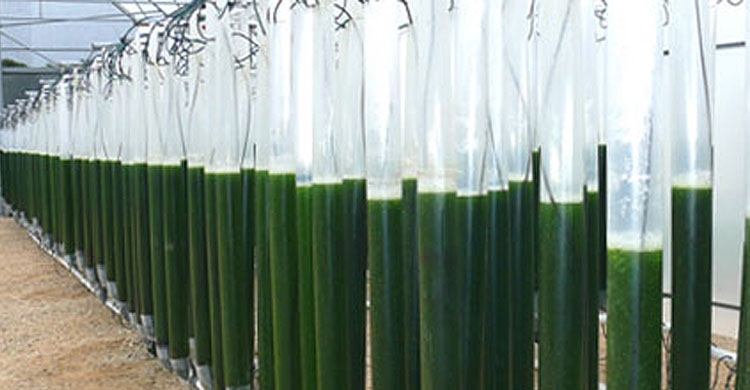 While Prof Ben Zeelie was trying to figure out how he could grow enough algae as a source of biomass for biofuels, he made an unintended, yet rather fortunate, breakthrough.

“Somewhere along the line, we discovered by accident that algae and coal make a nice combination.” A nice combination as a biofuel briquette that is, one has been trademarked as Coalgae®.

Zeelie is the director of InnoVenton, a self-sustaining chemical technology research institute housed at Nelson Mandela Metropolitan University (NMMU). He has also headed up the Microalgae-to-Energy project, which was the source of this happy accident, since its conception in 2009.

The project has its roots in an agreement with the German government in 2006, which was looking to fund a biodiesel project in South Africa. In 2011, the Department of Science and Technology (DST) became the major funder of Microalgae-to-Energy; since then they have put more than R20 million into the project.

And that investment is now beginning to bear fruit.

The technology behind the briquette, which is made from a mixture of coal dust waste and single-celled microalgae, is actually quite simple, says Zeelie. Coal ore at a mine is processed underwater. Tiny fragments of coal break off, and the water that contains all the waste coal comes out of the system to be discarded onto a dump.

When a waste stream of coal dust is mixed with microalgae, the coal dust will stick to the algae but not mineral particles, so that the free minerals can be removed from the coal to increase its value. The coal-algae slurry can then be filtered and compressed to form the Coalgae® briquettes.

While using these briquettes for everyday heating or electricity generation are viable applications, Zeelie and his team have bigger plans. If you pyrolyse the briquettes (an industrial process in which organic matter is heated to around 500°C or above without oxygen), it produces a good-quality crude oil.

What’s especially exciting about this crude oil, according to Zeelie, is that it’s a hybrid of a fossil fuel and a biofuel.

“Later this year, we are supposed to have mandatory blending of biofuels in South Africa, which means a process for making normal fuels, a separate process for biofuels, and then a third process to blend the fuels together,” he says. “With the coal-algae combination, we can make the blended fuel in one step, cutting out separate biofuel production completely.”

This algal bioreactor system and the Coalgae® product alone justify investments into Microalgae-to-Energy project. But there are many more innovations to come out of this project – Zeelie says that the bioreactors seem to be able to clean municipal wastewater better than systems currently in place, and this is currently being tested further.

Another useful option is to use the algae for protein production – about 60% of algal biomass is protein that can be used for animal or human consumption. This is the most environmentally-friendly way to produce cheap protein: it uses less space and fewer resources than soya, the current favourite non-animal protein source.

The Microalgae-to-Energy project has over the last year thoroughly evaluated whether the Coalgae® technology will be financially viable at industrial scale, in collaboration with engineering firms Hatch-Goba and Infinergy Consulting.

“With our latest cultivation system for the algae, the economics look very good. The system really is the best in the world,” says Zeelie. He adds that in the last year, they have reduced the cost of building a plant by 60%, and also significantly reduced their operating costs.

The technique used to cultivate the algae is also quite innovative: the algae can be fed on flue gas, which is released by power stations burning coal. It is rich in carbon dioxide, nitrogen oxide and nitrogen dioxide – perfect food for photosynthesising algae. “For every kilogram of algae,” explains Zeelie, “we will consume two kilograms of CO2, and about a quarter of a kilogram of nitrogen dioxide.” That’s all of the nitrogen and most of the CO2 in the waste flue gas.

Currently, the project produces batches of Coalgae® to send to potential clients for testing – this is required by the DST, and must be complied with before further funding to build an industrial-scale facility will be provided. There is also interest in building pilot facilities in the USA and China.

Another potential hurdle coming up for Coalgae® is a full-scale refinery test on the hybrid crude oil. For their product to be widely accepted, it must be compatible with conventional oil refineries.

The next few years will be crucial in determining whether Coalgae® and the Microalgae-to-Energy project will be worth the time and money dedicated to it. But, if early indications are anything to go by, it seems like Coalgae® is the type of accident that no-one will regret.

Prof Ben Zeelie is Head of InnoVenton at Nelson Mandela Metropolitan University, and heads up the Microalgae-to-Energy project.